In early January 2019, MVIHES received the final “Bulletin of Salmon Escapement for all salmon species for the Strait of Georgia – South Coast for 2018”. In case you’re wondering about the term “Escapement”, salmon escapement is a DFO term for the number of salmon that do not get caught by commercial or recreational fisheries and return to their freshwater spawning habitat. Here is the estimated salmon spawning run size for the Englishman River by species.

How do we get an Accurate Count of Salmon in our River?

Every fall, staff from Fisheries and Oceans Canada, Stock Assessment Division for South Coast (Nanaimo) organize the count of Pacific Salmon spawners on the east coast of the Island (and, for that matter, all of BC). The Englishman River, like many other rivers on Vancouver Island, has been subject to counts of salmon since the 1940’s. 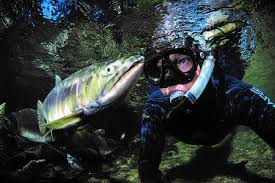 The Englishman River does not have a fence (like Big Qualicum or Little Qualicum Rivers) where salmon can be counted upstream, resulting in a “total cumulative count” of spawners. Instead, a “partial quantitative assessment” of the river during the spawning period is conducted using snorkel surveys.

Surveys begin in early September, before Pink Salmon start to enter the river, and usually finish in late November. Sometimes the surveys are cut short due to dangerously high flows or murky conditions that seriously reduce visibility. 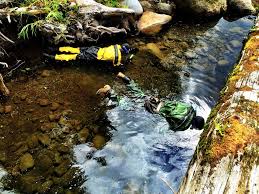 The surveys are done using a staff person from DFO Stock Assessment in Nanaimo, teamed up with snorkelers from the British Columbia Conservation Foundation. Snorkelers in dry suits swim a 4 km section of the river and count salmon by species, note their condition and whether they are spawning or holding in pools, and estimate the number of dead fish (carcasses). A note taker records this information after snorkelers have surveyed a pool or run in their section of river.

The goal is to swim the entire river ten times during the fall spawning season. Since the salmon accessible portion of the river is too long to swim in one day, it has been divided into three swim sections:

When Do Salmon Enter the River? 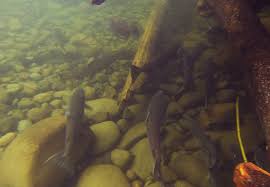 Pinks are first to enter the estuary in late August, holding in pools below the Orange Bridge. Moving slowly upstream, they can be seen in numbers up past Top Bridge Park, to Morrison Creek by the second week in September. Peak spawn for Pinks is 2nd or 3rd week in September.

Chinook also enter the river when flows in the river are very low in early September. By late September to early October, the peak of the run of Chinook have spawned in the mainstem of the river, mostly from Morrison Creek confluence downstream to Top Bridge Park.

Coho start to enter the river in late September, with a peak of the river count in late October. Coho move into South Englishman River and Center Creek throughout November, but no estimates of how many fish escape into tributaries is made.

Chum salmon begin to enter the river around Thanksgiving weekend and counts peak around the Remembrance Day holiday.

It is interesting to see the river is home to a small population of “river sockeye”. These fish swim up the river in early summer, and sit in the deeper pools in the upper river (like the falls pool below Englishman River Falls). The population is very small, and because they sit in the bottom of the deep pools, swim surveys do not get an accurate count (other than to say there are less than five fish in the river.)

Are the Salmon Runs in the river Wild or Hatchery Augmented?

For the past 15+ years, there has been a small hatchery on the river, at the top of the Clay Young sidechannel. This facility, operated by the former Commercial Fishermen, has had a production goal of 1 million pink eggs and 100 K to 500K Chinook fry. So, Pink and Chinook escapements to the river are augmented by the hatchery. Coho, Chum and Sockeye are wild (naturally spawned) fish.