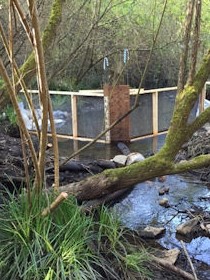 On May 11, the annual Coho smolt count that began on March 16 on Shelly Creek ended with a total count of 3,156 smolts and 13 Trout (2 Cutthroat, 11 Rainbow).  The counting was done by Shelley and Carl who maintained a distance of 2 m apart and successfully completed the count with neither of them catching the Coronavirus. YESSSS! It worked! Thank you Shelley and Carl.

How does the count compare with other years? Well, this year's Coho smolt number of 3,156 was within the range of 755 to 8,094 smolts counted since the annual smolt trapping program began in 2011.  The Trout numbers (13), however,  were much lower than expected and the fish were smaller. 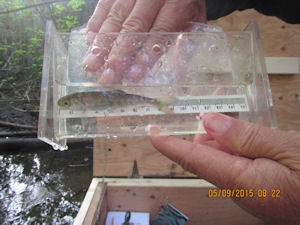 Or, it could be that the Trout were just socially distancing, unlike the snarky Coho.

Fortunately, we will be removing sediment from Martindale Pond in late summer in collaboration with a local contractor under a grant from Pacific Salmon Foundation. It is likely the counts in 2021, 2022 and 2023 will determine what impact removing the sediment had on the fish populations.