This time last year we had just completed Phase II of the Shelly Creek Fish Habitat Restoration project on a section of Shelly Creek that runs through the Shelly Farm located on Standford Ave in Parksville. Coho fry rearing habitat was restored along a 400 m section of creek which is not only supporting fry, but also supported around 25 Coho Salmon spawners last Fall. Woohoo!

This summer, fish habitat restoration work was completed on a 200 m section of Shelly Creek that flows downstream of Shelly Farm through private property (shown by the red line on the map below); a continuation of the work completed last year (shown by the blue line). The creek then flows through Martindale Pond (the site of restoration work in 2020) and under Martindale Road on its way to the Englishman River. The fish habitat restoration work was designed and supervised by our Biologist, Dave Clough. Funding was provided by the Pacific Salmon Foundation. 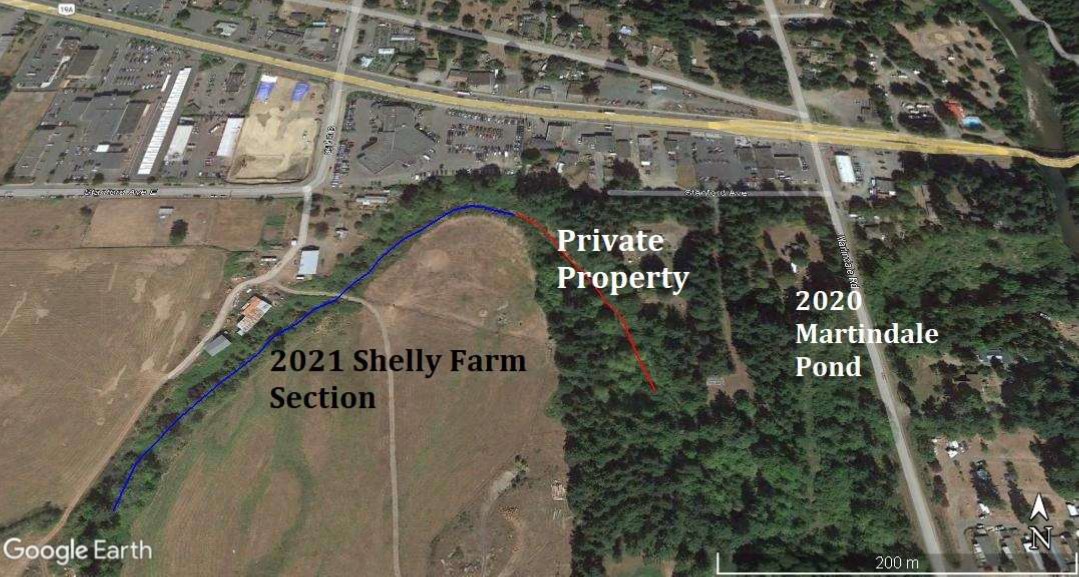 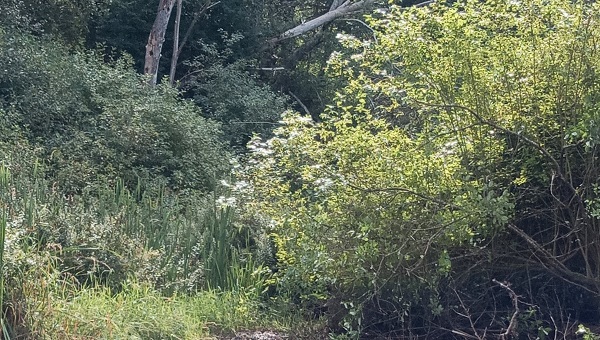 This section of creek had filled with sediment and was overgrown with mature red-osier dogwood and invasive reed canary grass and yellow iris, leaving little space for rearing Coho fry (left-hand photo). 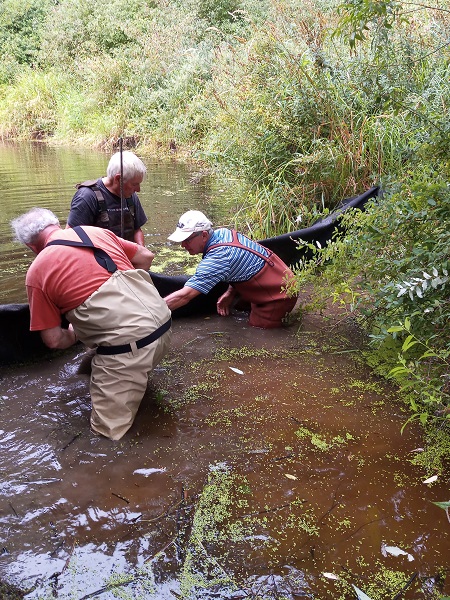 Although there was no flow in this section, it contained some open water making it necessary for MVIHES volunteers to remove fish using minnow traps and  transferring them to the Englishman River before work could begin. Volunteers installed a sediment fence, as seen in the right-hand photo, to contain sediment generated by the restoration work and prevent fish and amphibians from moving into the work area from other areas of the creek.

Sediment and vegetation were excavated from the creek bed by Parksville Heavy Equipment (PHE), as shown below in the left-hand photo. The middle photo shows that piles of sediment were placed a distance away from the creek and contoured to a smooth surface to prevent it from washing back into the water during heavy rainfall. The creek embankment was contoured to a shallow slope, as seen in the right-hand photo, to prevent erosion and maximize the volume of water that can be stored during storm events. Another awesome job by PHE. 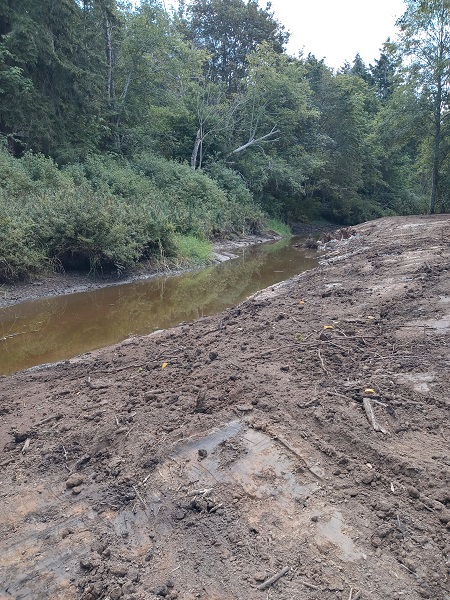 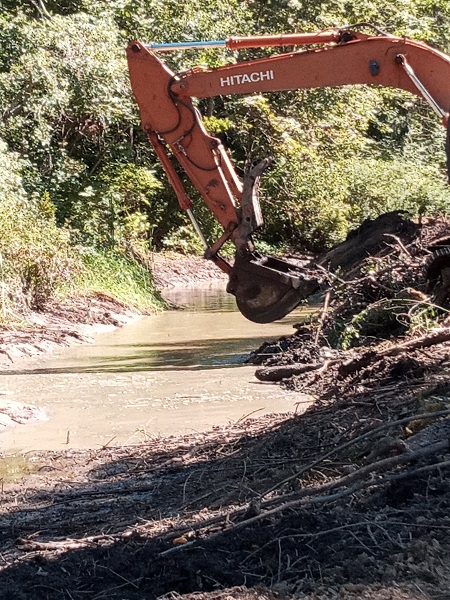 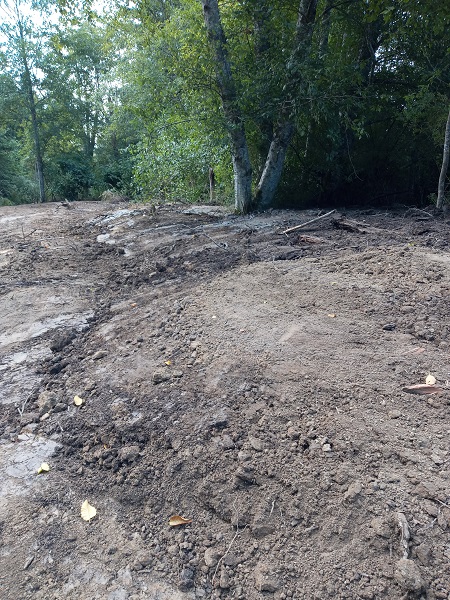 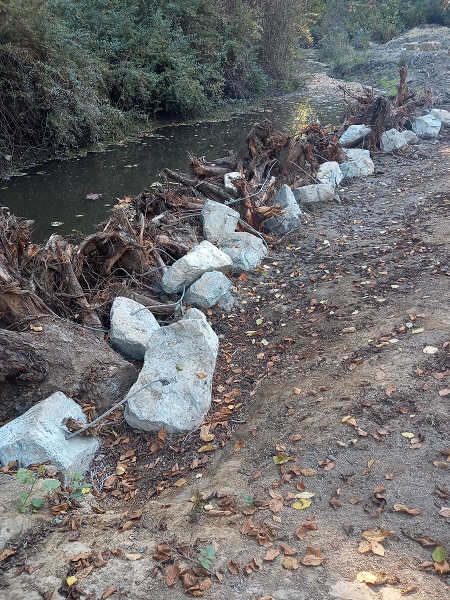 Stumps, commonly referred to as woody debris, were supplied by the Snaw-naw-as and installed in two areas along the creek bank to provide cover for fry and habitat for other animal species. The stumps were secured to boulders with cables by Snaw-naw-as member Chris Bob.

Ten volunteers handseeded the newly restored creek bank with a fast-growing erosion control grass seed mix, donated by PHE, and covered it with a layer of hay. The hay will hold the seed in place until it germinates, hold moisture for the growing grass, and add organic matter to the soil, enhancing vegetation growth. The hay (40 bales!) was graciously donated by Walter and Donna Paravicini of Qualicum Beach and delivered to the site by Ryan Christie (PHE) and MIVIHES volunteer Dick Dobler.

Below are some photos of our volunteers in action, including Anne Bailey spreading grass seed in the left-hand photo, a gang of super spreaders in the middle photo, and Mark Hutchinson spreading hay in the right-hand photo. 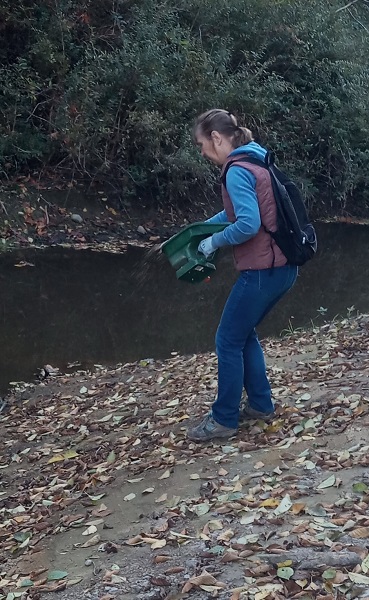 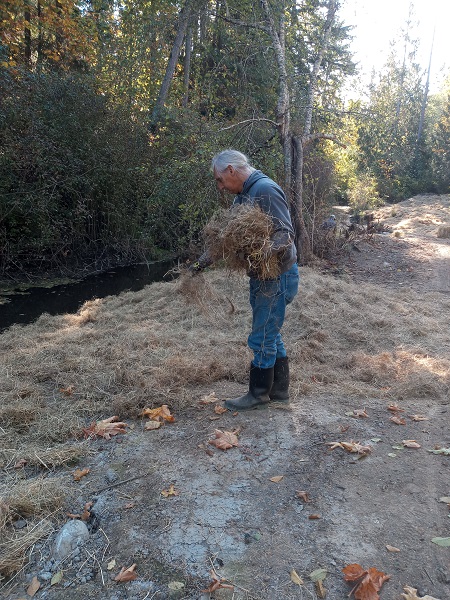 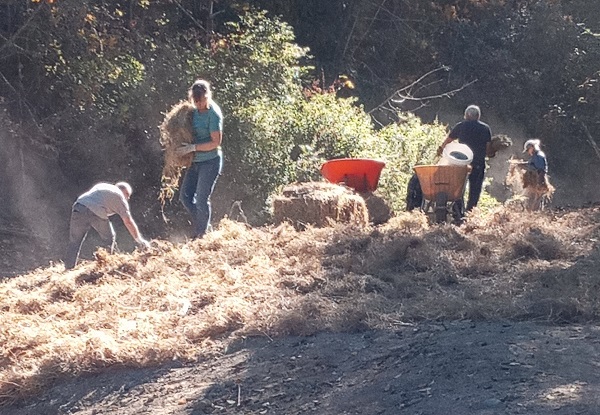 Many thanks go out to:

Werner and Antje Trawoger who gave us authorization to conduct the work on their property;

Murray and Shelly Laplante, owners of the Shelly Farm who allowed us to cross their farm to access the creek on the Trawoger property;