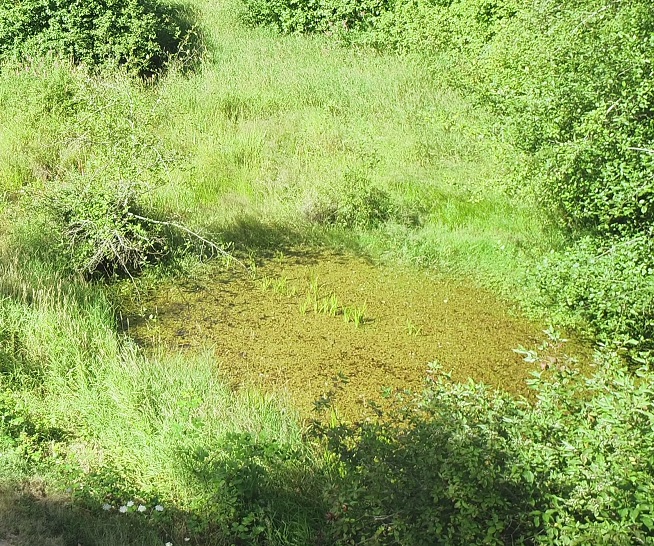 The pond desperately needed a good cleaning. We applied for and received funding from the Pacific Salmon Foundation for $50,000 to excavate the pond. A portion of the grant was contributed by Mosaic Forest Management, a sponsor of the Community Salmon Program. An application for a “Notification to Changes in a Stream” was submitted to the provincial government and a permit from the City of Parksville to work on City Property (Martindale Rd and road allowance) was also obtained.

Parksville Heavy Equipment was contracted to dig out the pond and haul the sediment in dump trucks to the Shelly Farm where it was spread on the fields as fertilizer. Over thirty truckloads of sediment were removed!

A crane with a "clamshell" bucket hanging off the end of a 90 foot boom was used to grab the sediment from the pond and dump it beside a sump that allowed water to drain out of the sediment without running back into the pond. An excavator then picked up the sediment and placed it in a dump truck. See photos below. 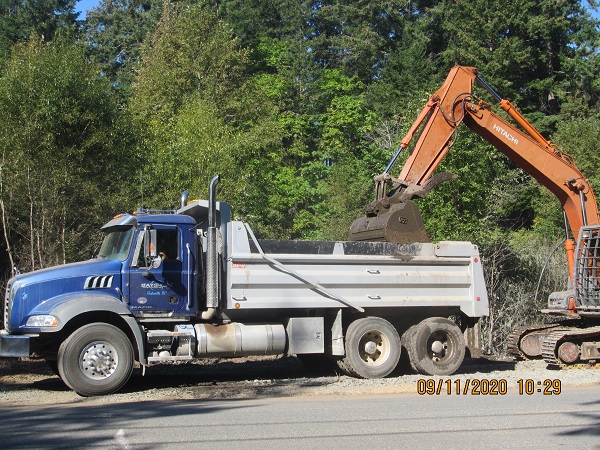 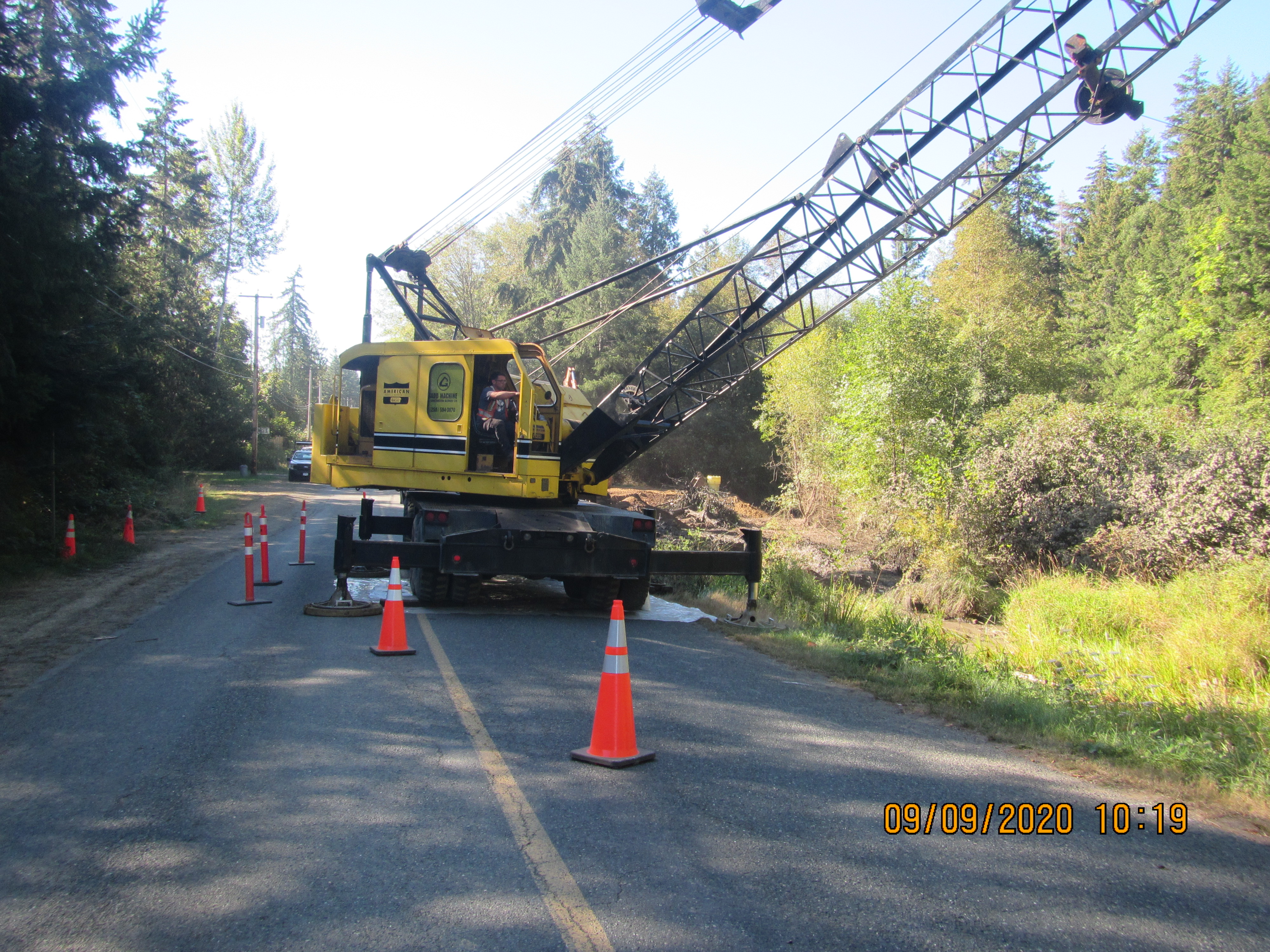 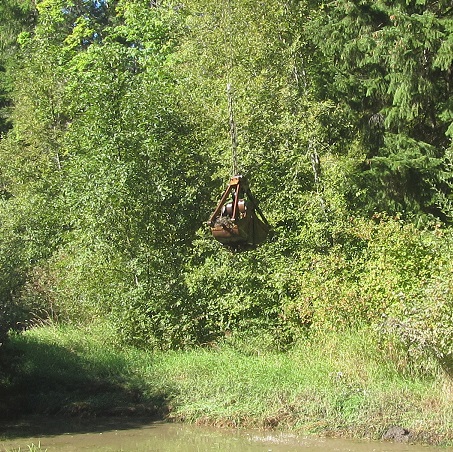 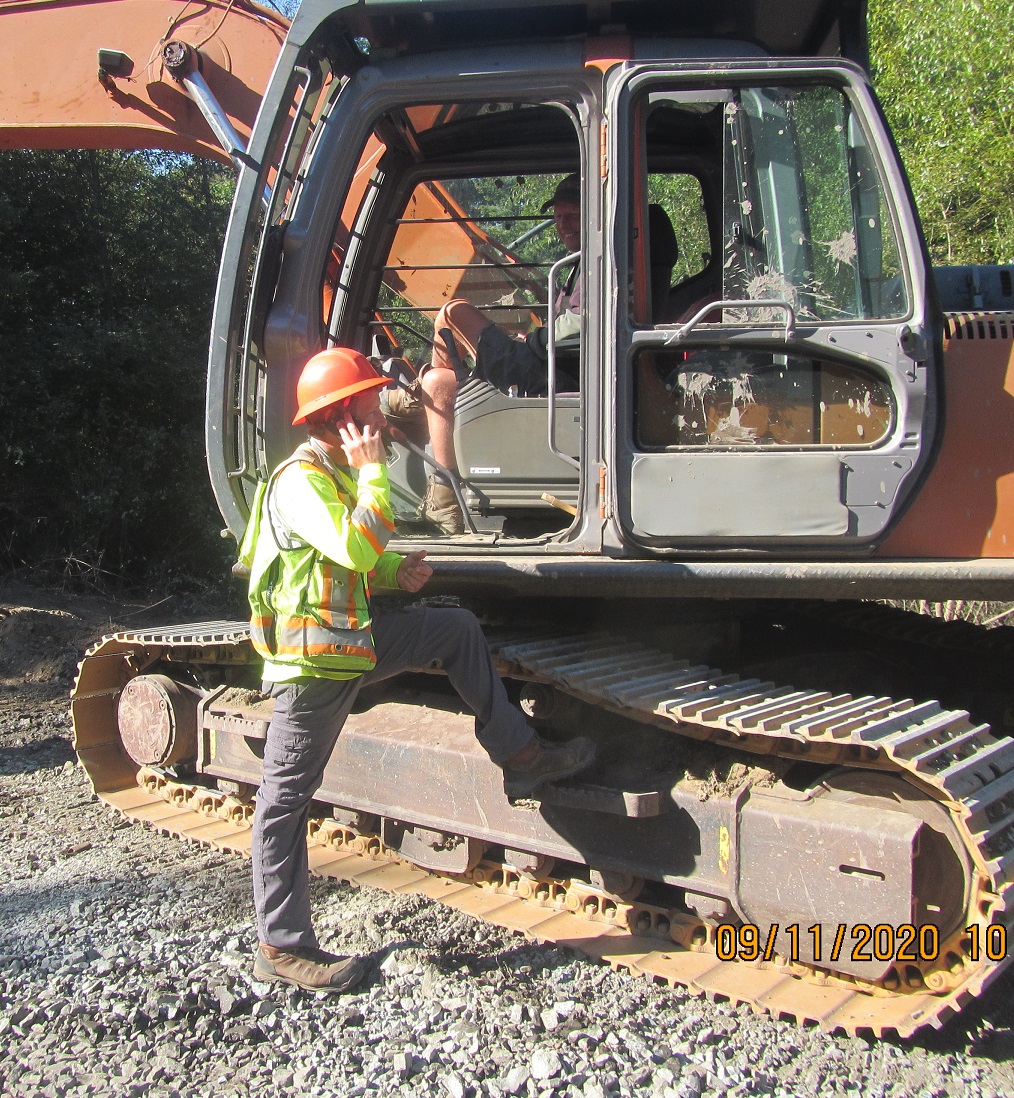 Biologist Dave Clough (right-hand photo) was on hand throughout the project to make sure erosion control measures were functioning as designed. Following removal of the sediment, the area that had been disturbed by the trucks and heavy equipment was rehabilitated under Dave's supervision using methods that are standard practice for Parksville Heavy Equipment. The area was graded and made smooth so that a fast growing grass seed mix prescribed for erosion control could be spread. Straw was spread over the area for a couple of reasons. The straw will stop the seed from blowing away or washing away in the rain. The straw will also stop the soil from being washed into the pond by the rain. 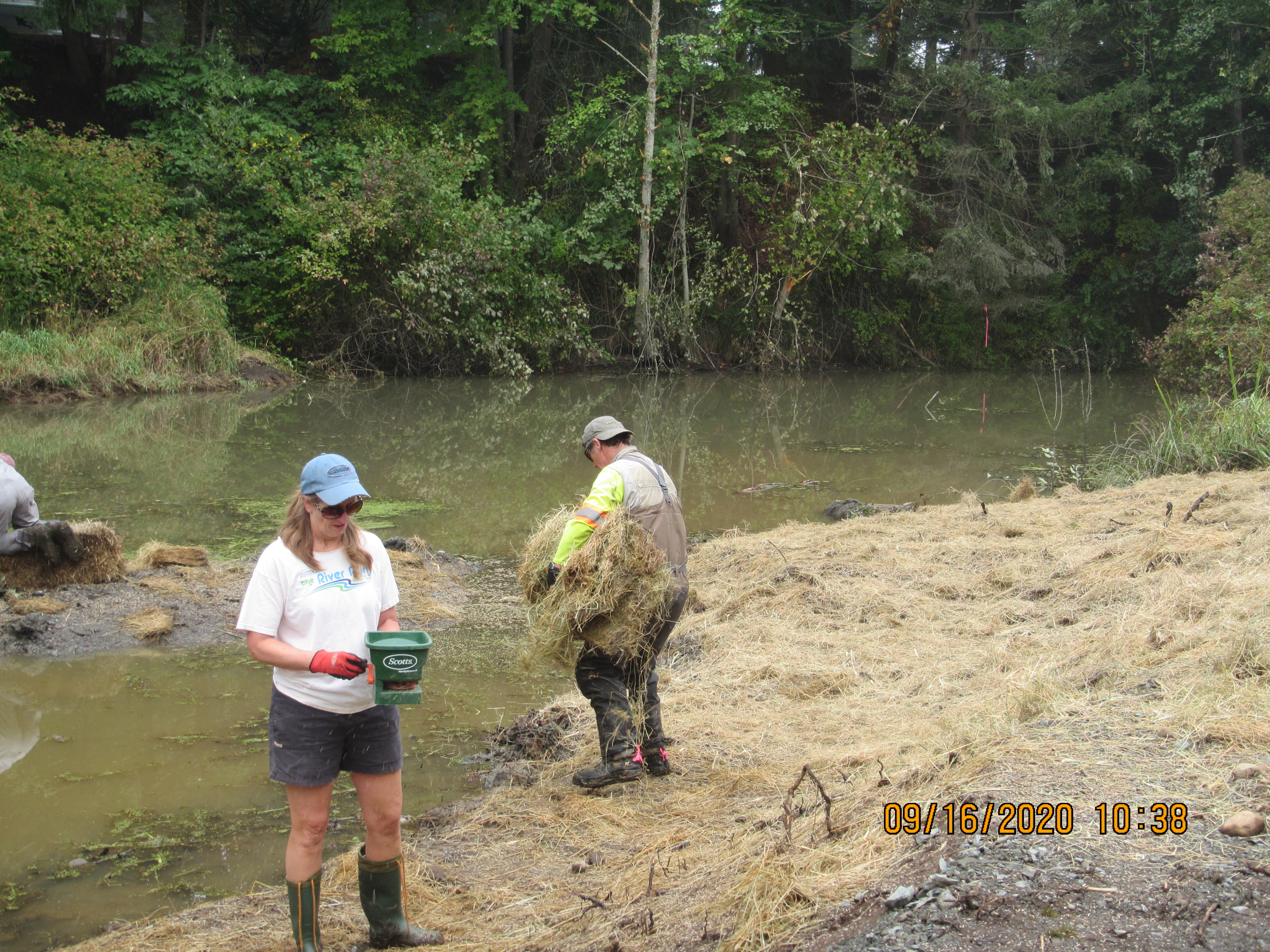 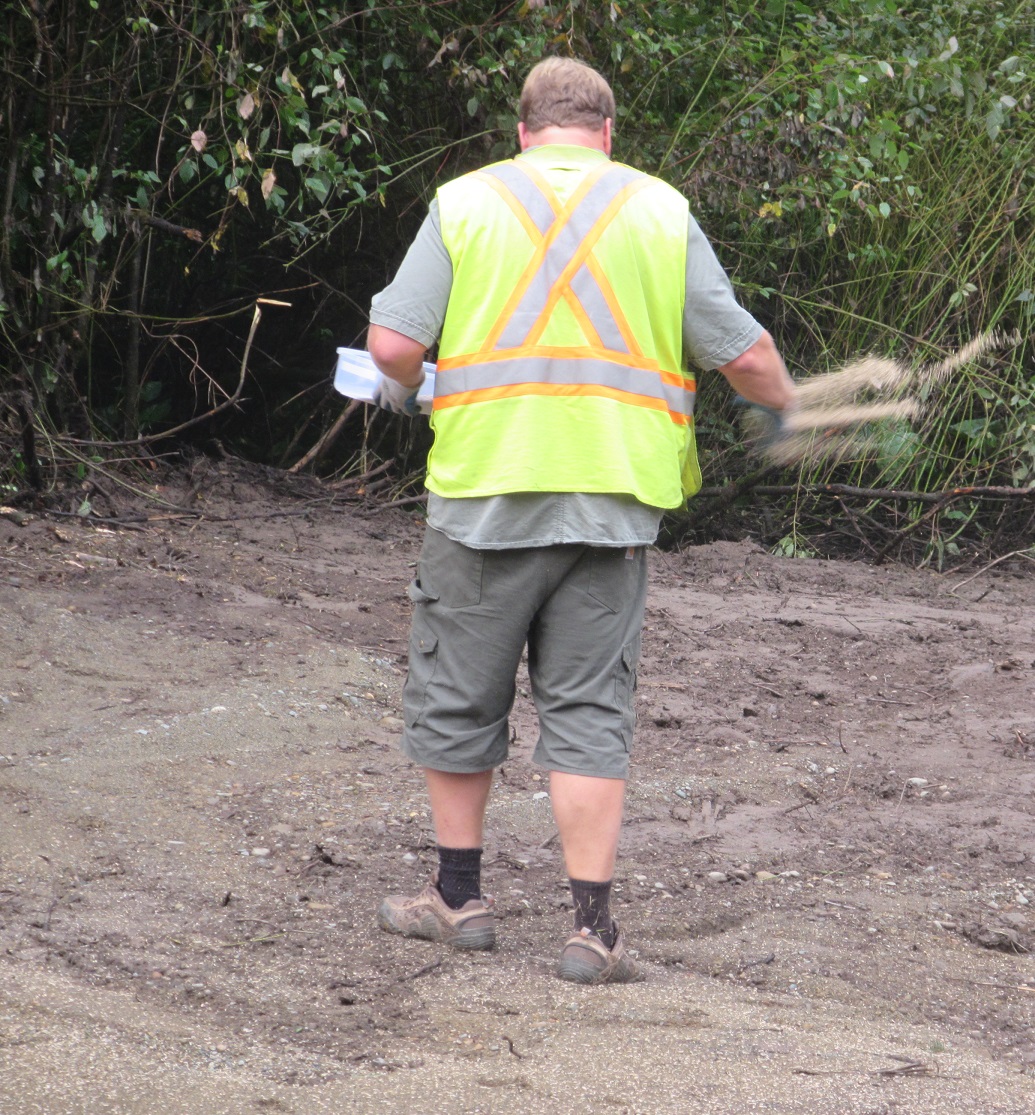 The seed and straw applications were followed by planting red-osier dogwood stakes around the edge of the pond where vegetation was removed. Red-osier dogwood is plentiful at the pond and is a great species for stabilizing the banks of creeks and ponds. Saplings are cut down and then cut into two foot lengths. These are called stakes which are planted about three-quarters of their length into the ground, often using a small sledge hammer. Roots will grow out of the section of stake buried in the ground and soon a new sapling will form. The photos below show some of our stakers. From left to right they are Pat Ashton, Pete Law, John Phillips, and below them, newcomers Quentin Jack-Little and Katrice Baur. Present but not in the photos was Duane Round.. 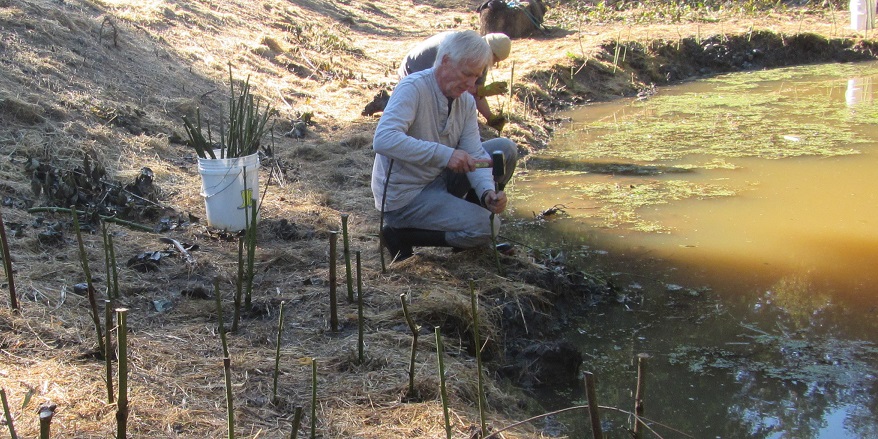 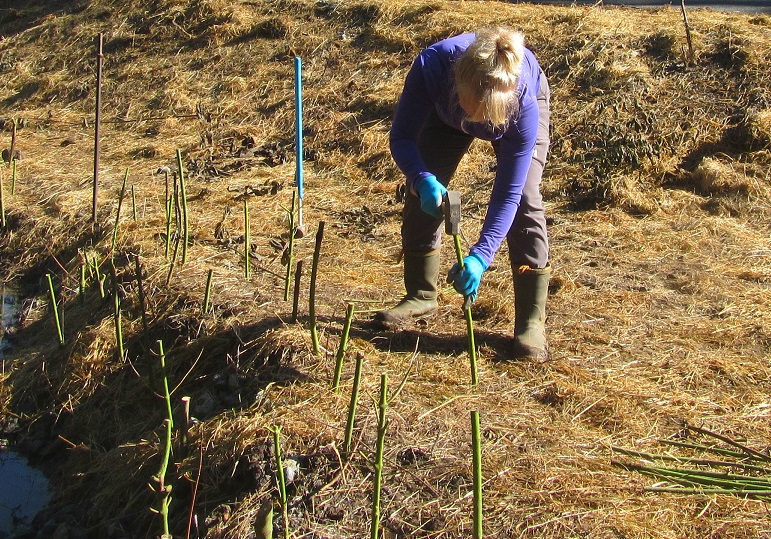 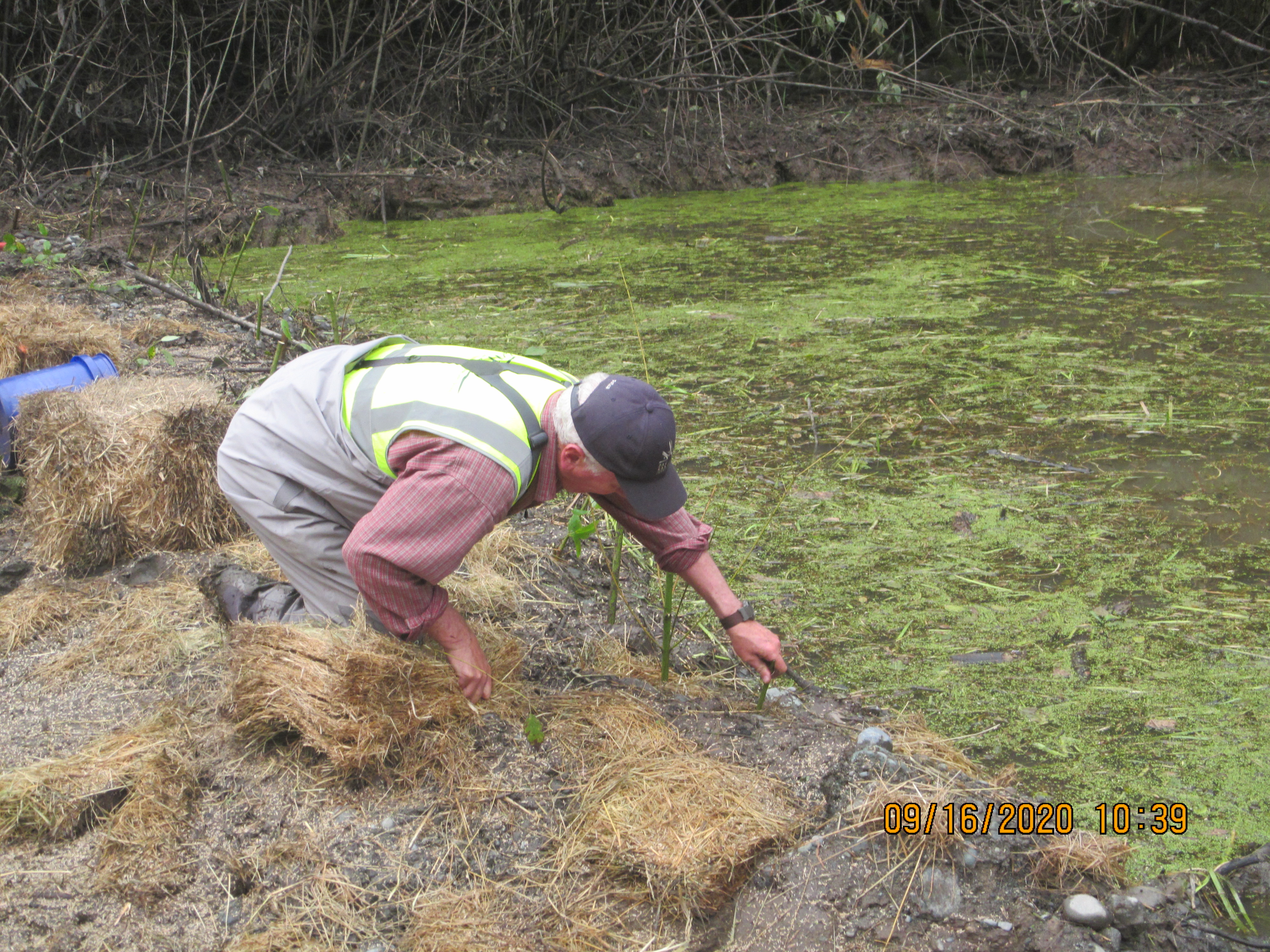 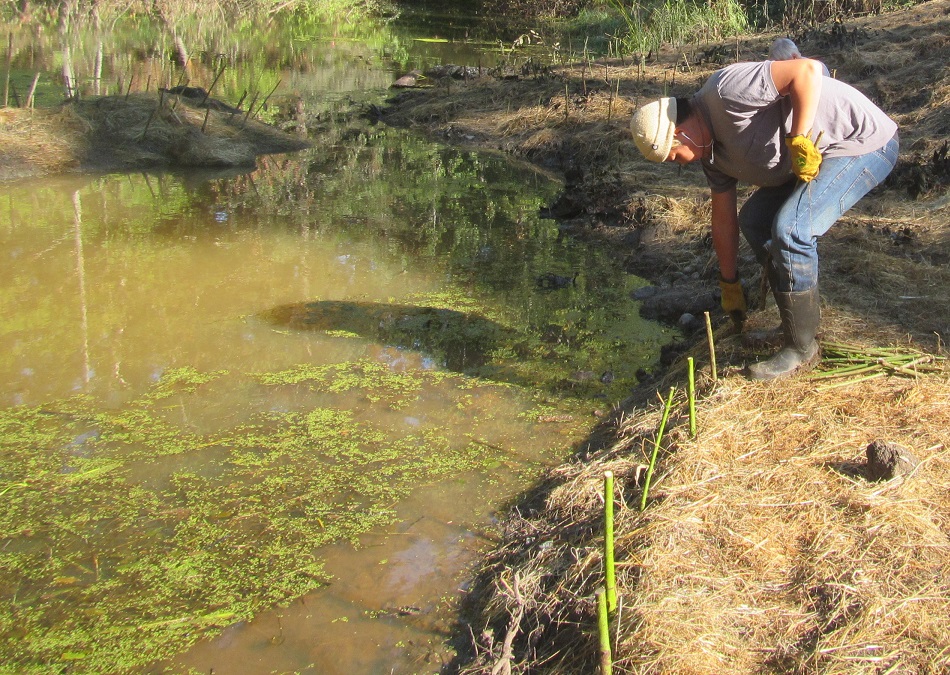 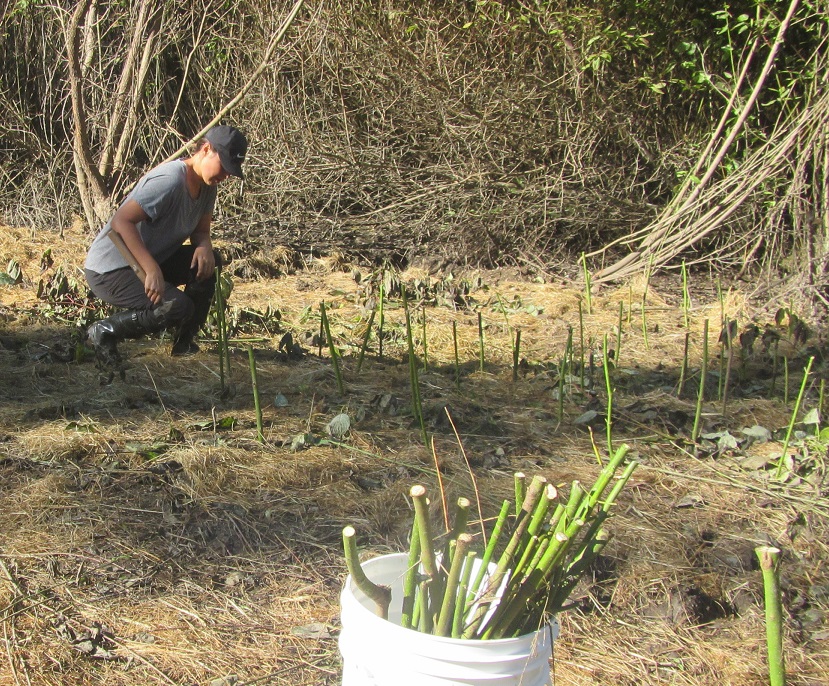 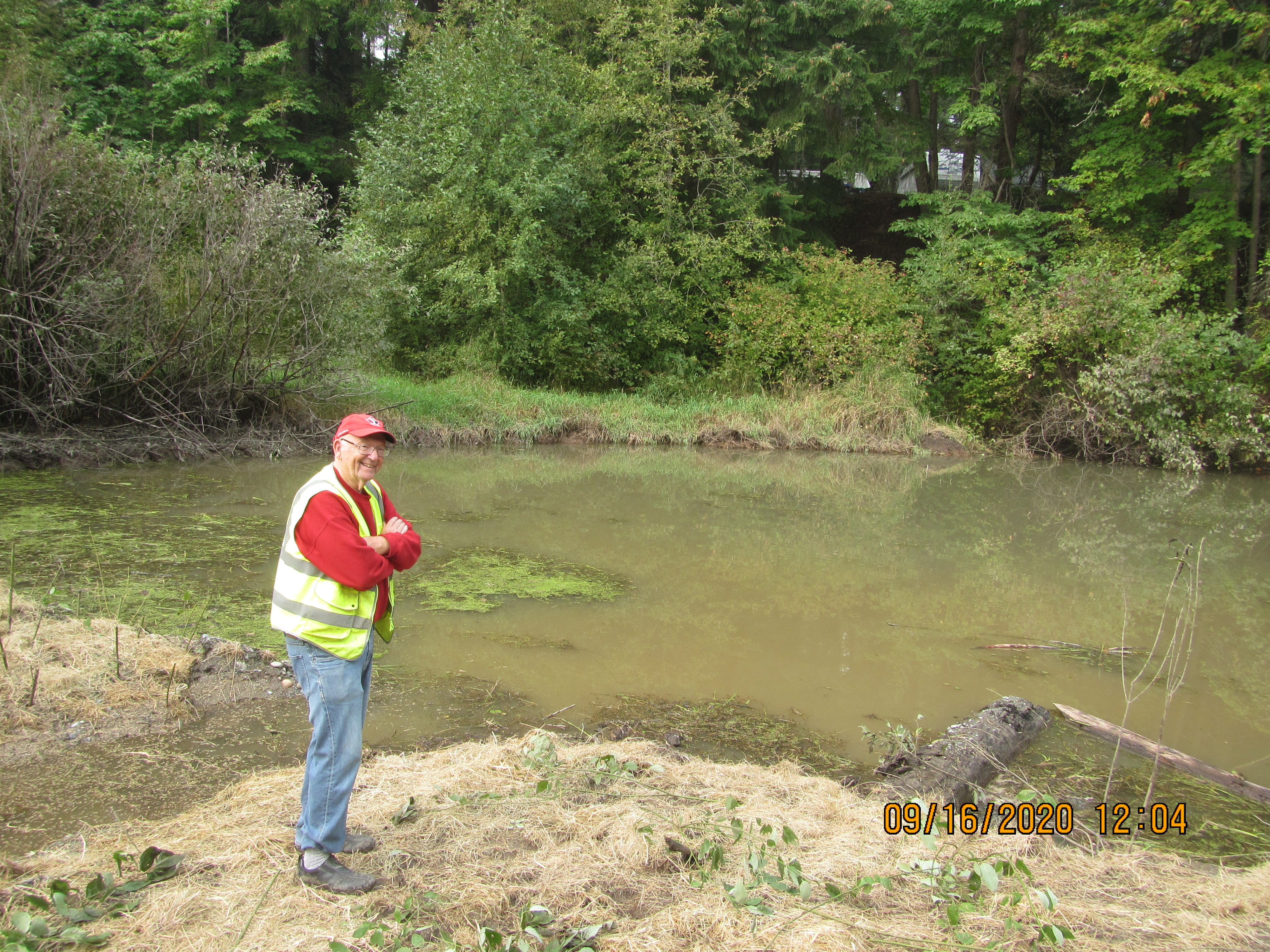 And voila, the finished product. This project was really Carl Rathburn's baby from the start. It's been three years in the making. Carl did all the communicating with land owners, including Shelly Farm, and organizing with Parksville Heavy Equipment and Dave Clough. Carl is in the right hand photo, admiring his new domain.

This project was a huge undertaking and could not have been done without the work by many parties. In addition to Carl Rathburn and the stakers (sounds like a rock 'n roll group), and seeder Shelley Goertzen, mentioned above, MVIHES would like to thank the following people:

Ryan Christie, John Christie and all the crew at Parksville Heavy Equipment: contractor for pond excavation and site restoration.

Koers Engineering: surveyed and provided engineered drawing of the pond while donating some of their engineering services.

Murray and Shelly Laplante, landowners of Shelly Farm : granted permission for hauling and spreading sediment on their fields.