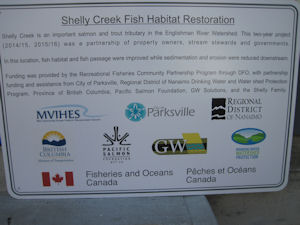 MVIHES has received a grant from Recreational Fisheries Conservation Partnerships Program to conduct restoration work on Shelly Creek at the top of Blower Road in Parksville. The objectives of the restoration work are to prevent more sediment from filling in the valuable fish rearing areas of lower Shelly Creek while improving fish habitat upstream through bank stabilization, channel stabilization, fish passage improvement, instream complexing and riparian planting. Right now there is no flow in the creek so this is the best time to conduct work.  Prescriptions and other preparations for this project were completed in fiscal 2014-15. Pictured is a sign that lists other partners in the project. Be aware that the work is being completed on private property so if you go to view, please stay on the road – that provides the best vantage point anyway. 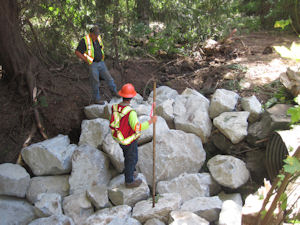 Day 1 – large rock was brought to the site and the first weir was started. Three weirs will be built in total to improve flow, erosion issues and facilitate fish passage. 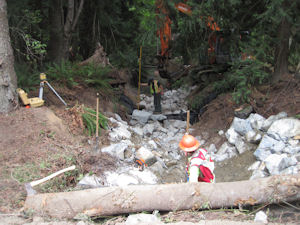 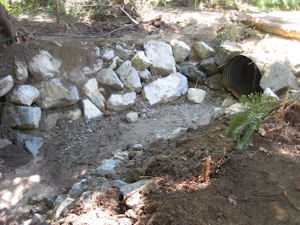 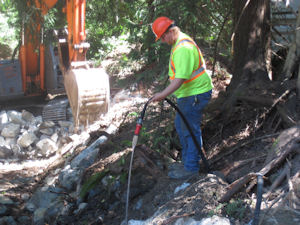 James is watering to pack loose soil between the rocks, and it keeps the site safe from fire caused by sparks 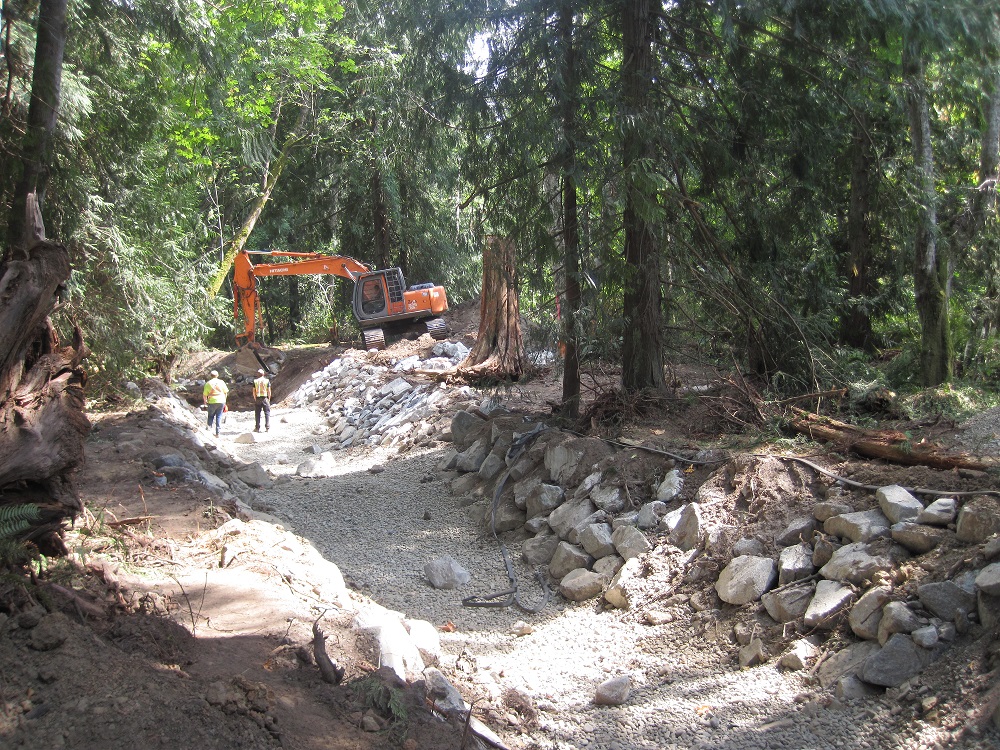 Days 5 – 9 – another couple of weirs under construction. Some finishing touches starting, such as the addition of spawning gravel. It’s looking great!

Shelly Creek drains from the base of Little Mountain in Parksville, BC and flows northeast into the Englishman River, approximately 2 km from the Strait of Georgia. The confluence is located 200 m upstream of the Island Highway 19(A) Bridge. This stream channel is approximately 6.5 km long, draining a watershed area of approximately 5 km². All of the reaches of Shelly Creek have been negatively impacted by agriculture and urbanization. 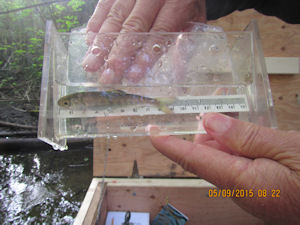 Resident cutthroat trout are found in Shelly Creek throughout the length of the creek below the E&N rail crossing.  Currently, cutthroat migration is limited because of several man-made obstructions. Coho smolt and fry also inhabit the creek. It is believed they enter Shelly Creek to escape the high flows of the Englishman River during the winter months and migrate back into the Englishman River during the spring to avoid the high water temperatures and low oxygen levels that come with summer weather. 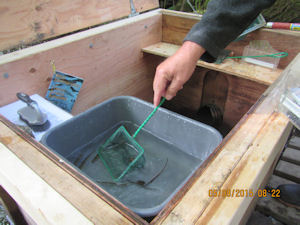 Since 2011, MVIHES has  monitored the outward migration of juvenile coho and other fish from Shelly Creek.  This was done by installing a smolt trap ~200 m upstream from the confluence with the Englishman River.  As many as 8094 coho smolt have overwintered in Shelly Creek before migrating into the Englishman River, which shows the importance of the creek to coho salmon production. 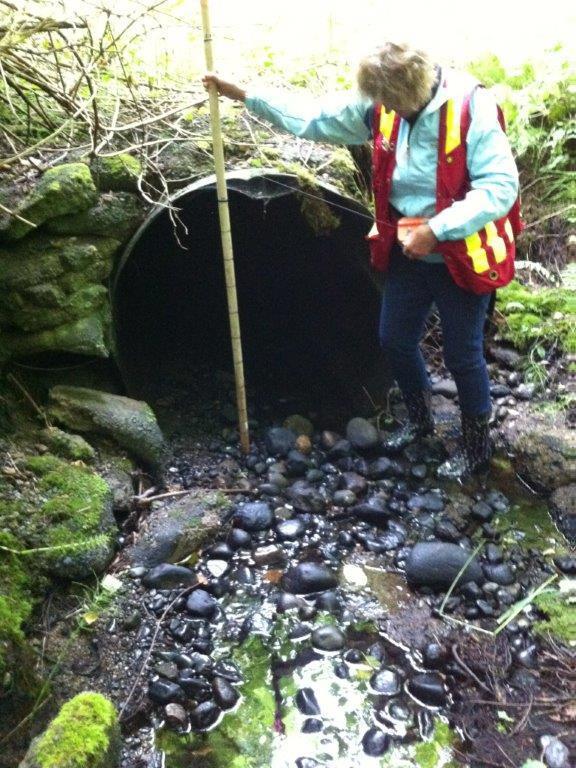 As part of the Watershed Health and You program, Shelly Creek was subject to an instream fish habitat assessment in summer 2014. Volunteers were trained by Fisheries Biologist, Dave Clough, in the Urban Salmon Habitat Program (USHP) methodology. Shelly Creek was assessed in 1999 by MVIHES members using the USHP so this provided a great opportunity to replicate the study in 2014 and get new volunteers to assess  this important tributary and determine the condition of the habitat after 15 years. The lower section (below Hwy 19) of Shelly Creek was studied in 2014.

The findings of the study were concerning and included a 50% decrease in pools, less cover for fish, significant increase in the amount of fine sediment covering the bottom of pools, less gravel for spawning, significant increase in erosion of stream banks, a high number of obstructions to fish passage during low flow periods, and man-made alterations to the creek. A geomorphic overview was conducted by North West Hydraulics in Nanaimo who recommended approaches to habitat enhancement for the creek. Shelly Creek Restoration was completed in summer 2015 at the end of Blower Road.

This included armouring the creek banks downstream of the culvert with rock to prevent further erosion. Weirs were constructed using rock and geotextile cloth to create pools. The installation of gravel has created spawning habitat. A large settling pond was constructed upstream of the culvert to trap sediment and prevent it from covering the spawning gravel.  And the creek bed was built up to the bottom of the culvert to allow fish passage. In March 2016, swordferns, cedar, salmonberry and red osier dogwood seedlings were planted along the creek banks and in areas that were disturbed by the equipment used to complete the restoration work.

In 2015, an USHP was completed on the upper section of Shelly Creek, above Hwy 19. The results showed that much of the 2 km of creek above Hwy 19 has been excavated. This has resulted in significant changes to the natural hydrology of the watershed. Click here to read the  complete report, Shelly Creek Stream Assessment and Fish Habitat Survey Report-2014 and 2015. 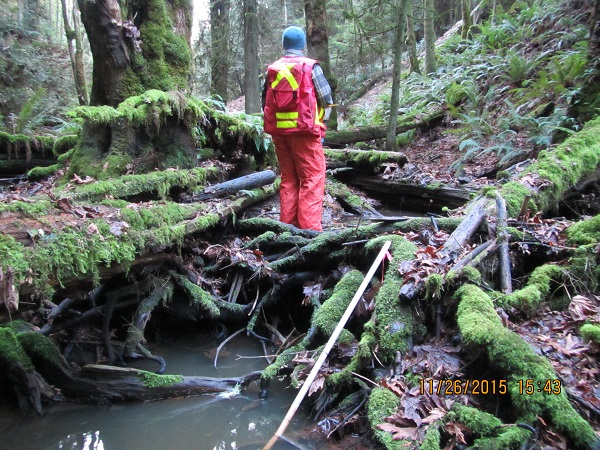 In an effort to understand how these changes to the stream’s hydrology can be modified to improve the stability of the creek, and hence the water quality, MVIHES hired one of British Columbia’s experts on water engineering, Jim Dumont, P.Eng., to study the creek and provide us with a report titled: Shelly Creek Water Balance and Sediment Reduction Plan, Technical Summary.  Following publication of this report,  two Water Stewardship Symposiums have been held to help communities develop methods and strategies to restore the natural hydrology to their creeks.

In 2016, a colony of Yellow Iris (an invasive species that fills in wetlands and displaces fish habitat) was found growing in the lower section of Shelly Creek. Click here to watch a video and read an article on our volunteers in action as they eradicate these plants from the creek. 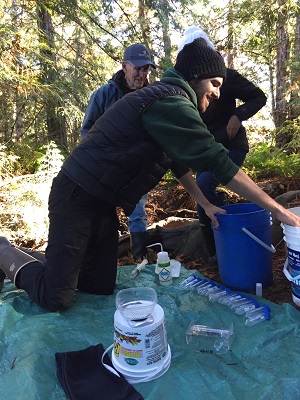 In 2018, a student from Vancouver Island University conducted a very interesting study on the diet of the Cutthroat Trout population that resides in Shelly Creek 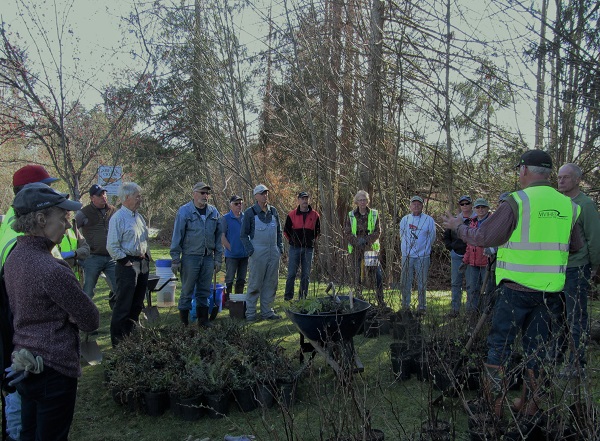 In 2019, volunteers and residents living near Shelly Creek planted ferns, trees and shrub seedlings along the banks of the creek in the area where the Cutthroat Trout reside.

Read about more salmon habitat restoration projects in our Newsroom. 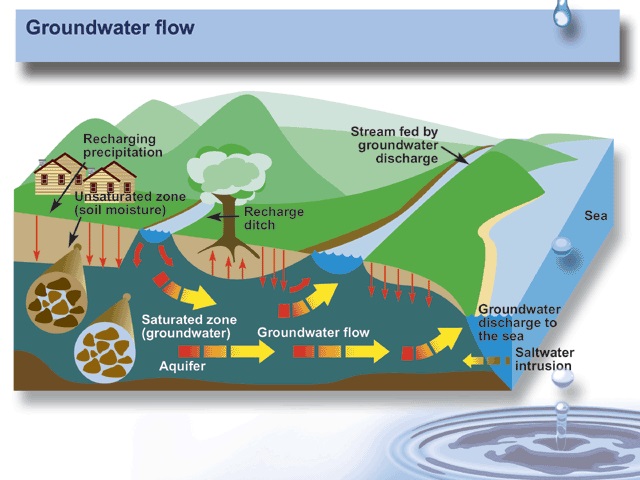 The objectives of the Groundwater Mapping and Education initiative are to create a community based watershed monitoring and protection program, collect information on the presence and behavior of aquifers in the Englishman River watershed, and define the interconnection between the aquifers and the Englishman River.

The initiative has been implemented in two phases.  The first phase began in August 2009 and updated our knowledge about the aquifers in the surficial sediment deposits (sand and gravel), and characterized the dynamic flow of groundwater between the aquifer and the river concentrating on the lower portion of the watershed. This was completed in February 2012. 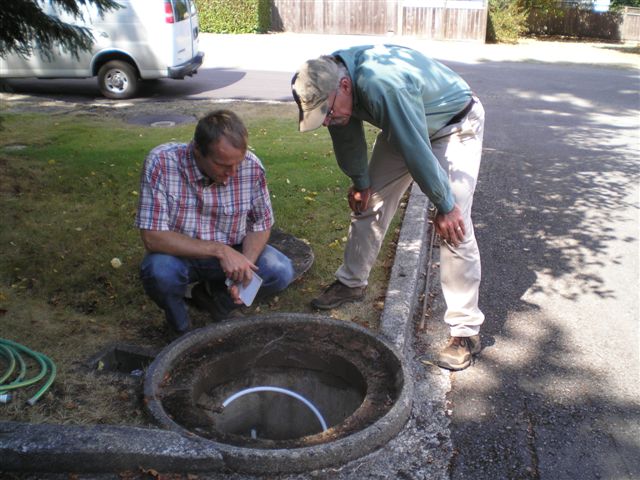 The second phase was initiated in 2015 to quantify and qualify the role of bedrock in the groundwater dynamics of the Englishman River watershed. Groundwater contribution in the watershed is thought to be significant, and bedrock is present across the whole watershed so understanding the interaction is important in defining the interconnection between aquifers and the Englishman River.

To accomplish this, data loggers have been installed in groundwater wells to record changes in groundwater levels. Data loggers have also been installed in the river in the vicinity of faults that intersect the river.  The data loggers measure water levels upstream and downstream of the faults. Stream flow measurements are also taken upstream and downstream of the faults.The first 2 years of data show that during the summer months, 6% of the river's flow is lost through faults between the Englishman River Falls and the fish hatchery. 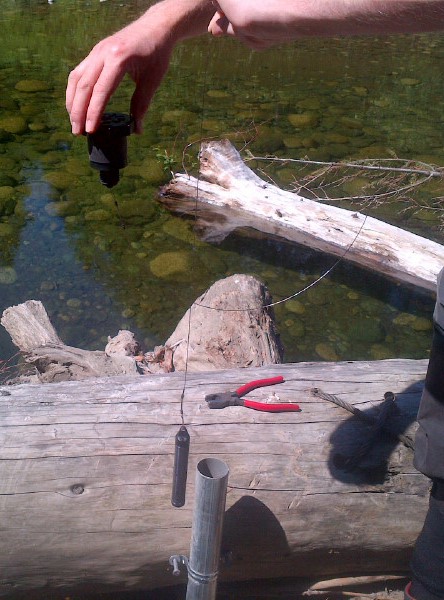 Both phases use a similar approach based on community involvement and aquifer monitoring.  The local community was involved to save the large cost of having to install new wells for monitoring by using existing wells that owners volunteered. We believe that the long term health of watersheds depends on the stewardship of the people who live in them.  By getting them 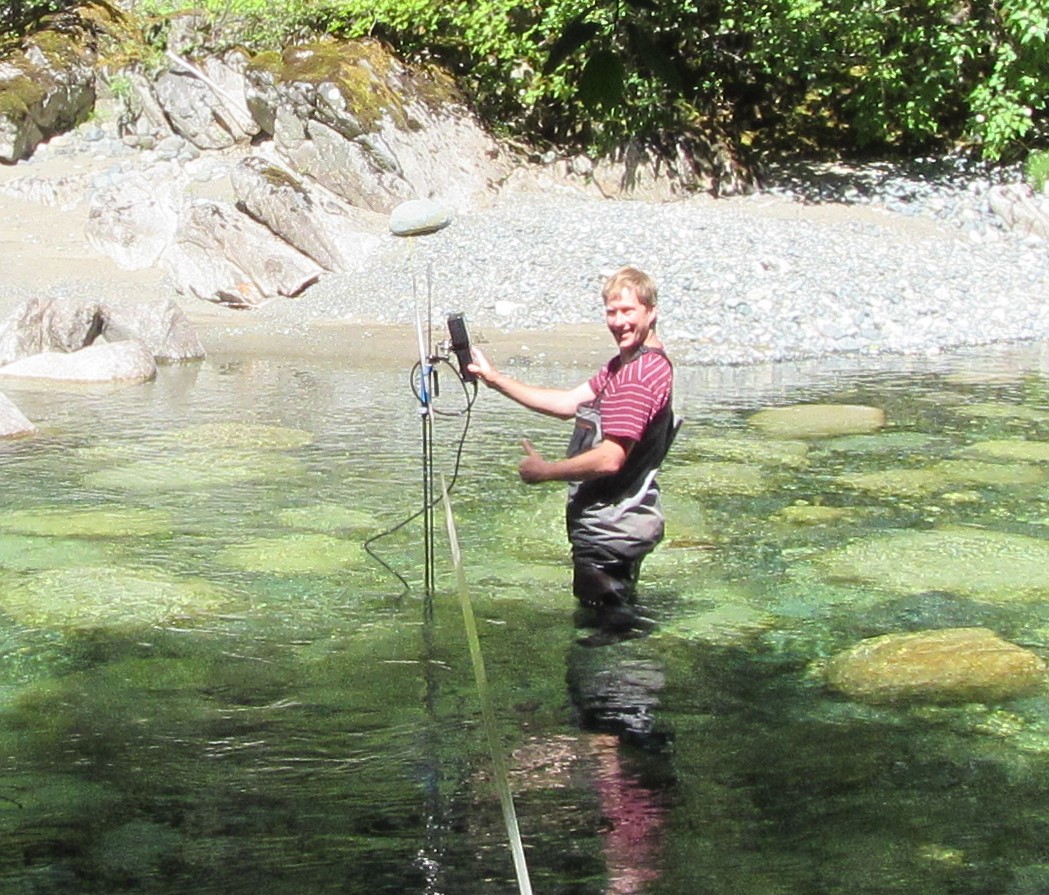 involved, the community connects to its watershed, its complexity, and how it works. When we establish a connection we are more willing to modify behavior and management of the land after they appreciate direct connection between what happens at the surface and what happens in the subsurface, on their property, their neighbors property and their local environment.

We appreciate the support of the following sponsors:

Groundwater Flow Through Bedrock Contributing to the Englishman River (Oct 2014)